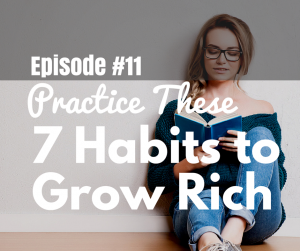 If you want to improve your financial life there are habits to grow rich that you need to adopt sooner rather than later.

You’ve heard it plenty: habits have a huge influence on your life. Some boost your financial well-being and others derail it.

Laura and Kate go through some amazing examples of how habits have shaped the outcomes of rich and poor people. And they uncover 7 of the most important habits to grow rich you can start to practice today.

“Motivation is what gets you started. Habit is what keeps you going.”   – Jim Rohn

Both books clearly demonstrate that good habits automatically put us on the path to success, and bad habits put us on the road to failure.

Corley identified over 300 habits that separate self-made millionaires from everybody else, especially from the poor. These, more than anything else, make the difference between being wealthy and happy, and being poor and struggling.

Here are 7 of the most important habits to grow rich:

They know that time is precious, and you should too. You don’t want take time away from useful things that can really make a difference in your life, like exercising or organizing finances or working on a side business.

Sadly, 77% of the poor people in the study said they watch more than an hour of TV a day.

There’s a great saying in Spanish: “Dime con quien andas, y te dire que tu eres.” Translation:  “Tell me who you walk with and I’ll tell you who you are.” If you spend a lot of time with successful people, you’ll get a success mindset.

In contrast, nearly all the rich people in the study spent more than one hour a week building relationships with people who are positive and goal-oriented and avoid toxic people. The rich build an extensive network of positive people around them by attending networking events, volunteering, and keeping in touch with contacts on social media.

In Corley’s study, there was a huge difference between how rich people and poor people take care of their health. 77% of the poor did not exercise at all. Almost two-thirds ate at fast food restaurants at least 3 times a week and over half slept less than 7 hours a night.

But almost 70% of the self-made millionaires exercised 30 minutes a day, and 89% of them slept 7 hours or more a night. Wealthy people know that exercise is a habit to grow rich. It improves brain function, and sleeping does too. Plus, both things give them the energy to focus on working hard at their goals all day.

Luckily, getting healthy is one of the fastest habits to change because you control these habits entirely yourself. A great way to get started tracking what you eat and how much you exercise is using the free app MyFitnessPal.

Habit #4: Read to educate yourself

Wealthy people aren’t reading for entertainment. They’re doing it to educate themselves, to acquire knowledge and learn for better performance. 88% of the self-made millionaires Corley studied for his book spend 30 minutes or more every day reading to learn new things. Over half also listened to audio books or podcasts while they’re commuting to work.

Unfortunately from the group of poor people, only 8% read to learn anything— nearly all of them read just for entertainment if they read at all.

Where can you find these good books that self-made millionaires are reading? Check out Ryan Holiday’s reading list, Bill Gates’ blog and Tim Ferris’s book club. Also, your local library is a great source for biographies, history and self-improvement books.

Self-made millionaires make a habit of saving money and controlling their spending, even when they have a lot of money to spend. Good day-to-day financial management is a key habit to grow rich.

In the study, 95% of the poor people did not save money at all, and most of them actually lived on debt. They had to subsidize their regular living costs with credit cards and loans.

By contrast, all the rich people in the study saved between 10% and 20% of their income before they even became millionaires. They automatically set up some of their income to go into savings, and used it to invest for their retirement, save for college or some other future event, create an emergency fund, and put money aside for things like vacation or birthday presents.

All of the poor people that Corley studied had only one income stream – their jobs. That’s risky because a job can go away overnight.

Most self-made millionaires get rich and even richer by creating multiple sources of income. In addition to their full-time jobs, they have other side businesses to earn money, like buying rental property, earning dividends from investing in the stock market, writing books or doing private coaching.

Anyone can begin to create multiple income streams, even without any money to start up. If you need some inspiration read Multiple Streams of Income: How to Generate a Lifetime of Unlimited Wealth! by Robert Allen. He researched hundreds of income-producing opportunities and narrowed them down to ten moneymakers anyone can profit from on a part-time basis, working from your home, using little or none of your own money.

Self-made millionaires pursue goals through a system called “dream-set then goal-set.” They create a script about their ideal future life, imagining in details how they will live and spend their time. It gives them a life plan to plan their goals to.

Corley saw that 95% of the poor people he studied had no life plan at all. They never made any kind of long-term goals for their future.

Start dream-setting now and creating habits to grow rich. If you don’t, you’ll likely stay in the same spot you are right now.

This week’s Richer Life Lab practical is to choose one of these habits to grow rich and practice it for at least a week. Notice a difference?

We want to hear about what’s working for you! Let us know if you try out one of the strategies we suggested in the show or have other recommendations that we can share with listeners in a future show.

Send us a Lab Report to podcast@richerlifelab.com or record a voice message on this page. You can delete and re-record your message if you need to.

A big thanks to our Richer Life Lab sponsor

Wealthminder — 70% of Americans are not on-track to meet their long-term financial goals. Don’t be one of them. Wealthminder makes it easy to connect with qualified financial advisors to get the guidance you need. Submit a request to find the right planning professional online. It’s simple and free. Visit wealthminder.com to get started.

We’d love to hear your feedback, questions and stories related to our podcast topics. We’d also welcome your ideas for new topics. Here’s how to reach us: